Even at 76-years, Salbiah binti Putih, a volunteer at Masjid Al-Husna in Sunway City Kuala Lumpur, is still hustling. Salbiah, who no longer holds a day job, spends almost every day volunteering at the mosque in an effort to help the local community.

This Ramadan, however, Sunway is giving back to Salbiah. She is one of 900 beneficiaries from the ‘asnaf’ (eligible to receive aid) and low-income or B40, groups across the country that is benefiting from Sunway’s new rice auto teller machine (ATM) initiative, which allows recipients to withdraw rice from the ATMs via RFID cards.

“I’m not sure what to say. I’m so grateful and feel appreciated. I’m very thankful to Sunway for this gift. Alhamdulillah,” she said. How do the ATMs work?

Sunway is the first corporation in Malaysia to sponsor ATM Beras. The Group plans to donate a total of eight machines and more than 6,000kg of rice to underserved communities across the country.

The machines come with two functions – to give out rice supply in desired quantity and is equipped with a donation compartment to receive cash funds from the public, which will then be used to purchase more rice for the needy. 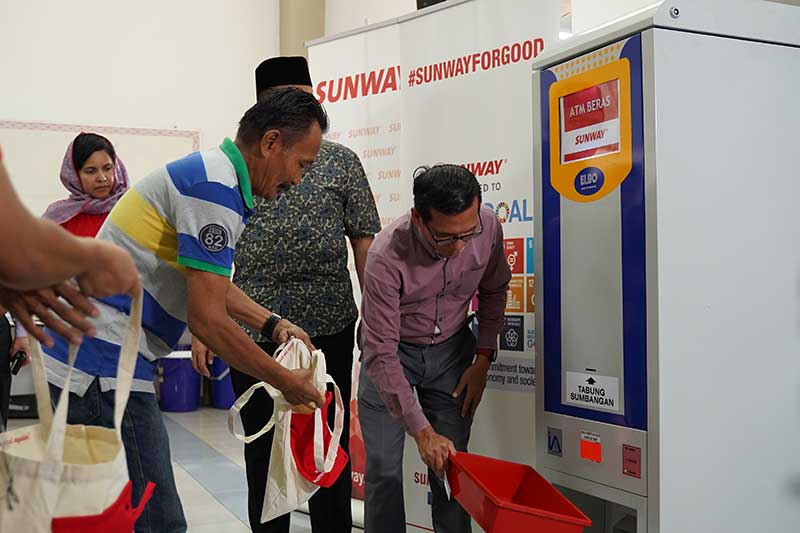 Eight machines and more than 6,000kg of rice will be distributed to underserved communities across the country.

Each machine can contain up to 200kg of rice at one time and operates by RFID card system. Identified beneficiaries will be provided with a card to collect 2kg of rice every first and third Friday of the month. To redeem rice, cardholders will only simply need to tap their cards on the ATM screen. The notable effort is part of Sunway’s widespread #SunwayforGood Raya Cheer 2019 initiative aimed at to reaching out to 11,520 Malaysians.

ATM Beras installed across the country

Last week, Sunway Group’s Deputy Chairman, Tan Sri Razman M. Hashim officiated the installation of the ATM Beras in Selangor by presenting senior administrator of Masjid Al-Husna, Alfian Izaz Abdul Halim, with the gift of an ATM Beras, as well as 1,500kg of rice as a head start in their bid to serve members of the community. The rice ATMs will be installed in the Klang Valley, Perak, Penang and Johor.

The rice ATM unveiled at Masjid Al-Husna is the first of its kind in Klang Valley. Sunway has already set up ATM Beras in Selangor, Penang and Johor, and plans to place two more machines in Perak as well.

In Penang, the rice was installed and launched at Masjid Daerah Seberang Perai Tengah, Bandar Perda. Another ATM will be installed at Markas MPKK Kampung Pertama, Permatang Pauh after the raya celebration. The rice ATM launched at Masjid Daerah Seberang Perai Tengah, Bandar Perda, Penang is the first in the country. An official from Masjid India, Johor Bahru, hands over two kilogramme of rice to a beneficiary.

Sunway’s ATM Beras effort is beautifully illustrated in the Group’s new festive short film, “Siapakah Aku”. It portrays the significance of rice and ‘us,’ the people of Sunway – two elements that encapsulate Sunway’s 2019 Raya CSR initiative, which consists of the installation and facilitation of rice dispenser machines, distribution of ‘bubur lambuk,’ and distribution of food and gifts to underprivileged families (Iftar Barakah).