The ambitious Make it Challenge, co-organised by Sunway University and Sunway iLabs, was designed to inspire participants to create more innovative solutions in the rapidly urbanizing world that we live in. The competition was launched on 8 September 2022, with a fireside chat titled “Creating the Cities of Dreams – Challenges and Opportunities.” In his opening remarks, Evan reiterated the purpose of the Make It Challenge and emphasized that the participants with game-changing ideas will be fully supported by Sunway Group’s enabling ecosystem, which comprises 13 business units, making it an engine and a launchpad for transformative innovation.

“We have the funds, mentorship and university’s research capabilities and the support of Sunway Group, its partners, and the government.”

Restating Sunway Group’s commitment and mission to create a sustainable future for all he said, “Sunway has been nation-building over the past 50 years. We have built roads, hospitals, shopping malls, and universities, supporting not-for-profit universities. It’s been something we’ve been doing for a long time and for the next 50 years, we want to have more long-term initiatives – hopefully good ideas that we can scale up for Malaysia and the world.”

Dedicating her keynote to highlighting the unbreakable link between human health and the health of the planet, Professor Tan Sri Dr. Jemilah began her speech by requesting participants to picture health – and uncovered that while most people relate health to hospitals and the healthcare system, the truth is that health is largely created outside the medical care system. 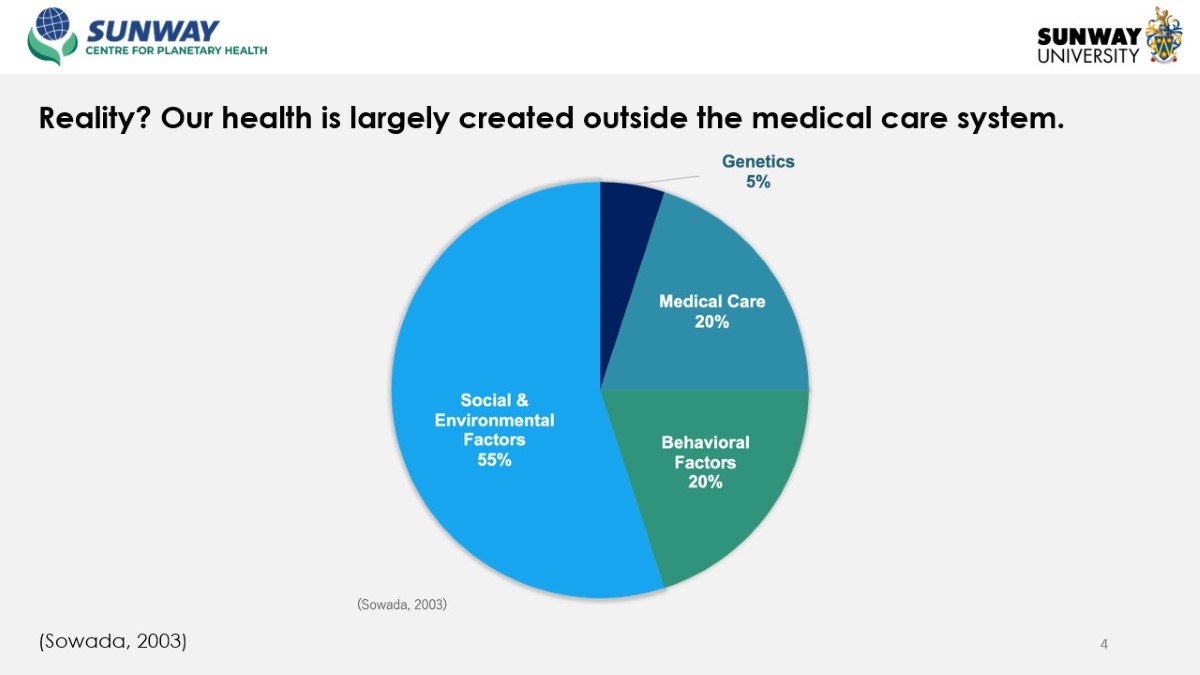 She underscored the urgent need for action and solutions by pointing out that the UN Human Development Report’s most recent findings show the devastating impact on billions of people around the world when crises like COVID-19 and the war in Ukraine interact with sweeping social, economic, and planetary shifts including climate change, and related factors.

“Over the past 50 years, humanity has made massive public health gains, but unfortunately, just a couple of hours ago, the UN Human Development Report reported for the first time, that humanity is facing its first back-to-back decline in human development in three decades,” she said.

Citing even more startling statistics, Professor Tan Sri Dr. Jemilah explained that developmental gains have been made at the expense of the planet. “By 2050, it’s estimated that 40 per cent of the world’s population could be under severe water stress. Some islands in the Pacific will disappear, including the Maldives in the Indian Ocean. Some parts of coastal Malaysia will be underwater, including some areas in which universities, schools, and businesses are currently located. And these occurrences will be as a direct result of our behaviours, causing climate and environmental degradation.”

“Biodiversity loss threatens humanity. This isn’t just about the cute orangutans or the polar bears; it’s about an entire ecosystem that has gone out of balance. As a result of a loss of biodiversity, animals move. And that is why we get zoonotic leaps where viruses jump from one animal host to another and to us.”

“The population is growing. We need more food, we need more chicken, we need more of everything. And when that happens, we just till the soil with no clear sustainable agricultural practices and therefore the soil also becomes unhealthy.” An Urgent Call For Everyone To Take Action

“About a year ago, in my capacity as the Public Health Advisor to the Prime Minister, when we looked at health and the transformation of health, we found that people are living longer but they are not living healthier lives.” She quoted an alarming warning by the Rockefeller Foundation-Lancet commission on planetary health, “We have mortgaged the health of future generations to realize economic and development gains in the present.”

“You in this room who are young should be very angry at us. We have failed you. We have developed with the hope of just increasing GDP, without thinking about your future.”

“We have microplastics in our blood because of all the terrible things we have done to ourselves. The amount of plastic we use. The shampoo, the face wash with those microplastic beads, all that gets into the water, the sea, the fish, everything.”

“The planetary health agenda, simply put, is that we, as human beings cannot thrive without the planet thriving. It needs to be both.” “Health is more encompassing. It’s not just about health ministries and facilities. It’s also about political, economic, and social systems that must be looked at; how we create the synergy and collaboration required for humanity to survive and thrive. So, it’s about achieving the highest level of health, well-being and equity.”

We Need to Put Our Cities Into A Great Transition

“We don’t have clean air; we have air which is not healthy. Our cities are built more for cars than for people. When we cross the road, we risk dying, being knocked by a car because the roads are just not made for people.”

To illustrate the dire consequences of not putting people at the centre of city development, Professor Dr. Jemilah cited a landmark ruling in Britain where a 9-year-old girl suffered a fatal asthma attack and became the only person in the world to officially have air pollution listed as the cause of death on her death certificate.

“Doctors have failed to recognize that this is a cause of death. The medical training that we received as doctors did not make us realise that the planet is killing us. This is why planetary health is so critical. If you don’t understand the linkages between the planet’s health, your health, and sustainability, then everyone is affected.

We Are Both the Problem and the Solution

Professor Tan Sri Dr. Jemilah concluded her remarks with a clarion call for action. She also shared some useful tools to empower the audience and to activate further development of solutions, as well as to encourage participants to leverage the Sunway Group’s comprehensive ecosystem.

In addition, she shared Kate Raworth’s Doughnut Economics framework as a systematic way to think about a more sustainable growth model that ensures planetary boundaries are protected, beyond the sole and often imbalanced pursuit of limitless economic growth.

“Every one of us is responsible for both the damage and the good that is happening on the planet. You and me, all of us.”

The article originally appeared in Disruptr Feeling A Little Uneasy to Travel Post – COVID?
Next >