Age of the Farmer

A wave of unrest is sweeping across the farming society. For decades, industrialisation has left many of its members grappling with tanking commodity prices and environmental degradation. But even more troubling is its rapidly aging population. Since World War II, countries worldwide have recorded a drastic decline in people working in agricultural areas. Currently, the average age of farmers in the United States, Japan and the European Union is 60 with less than five percent under the age of 35. Closer to home, the trend is equally pronounced: Data from the Department of Statistics Malaysia reveals a shrinking proportion of the agricultural workforce, which made up only 15% of the total local employment in 2018 – down by a total of 11% from 1990. If we are not careful, farmers will soon become a dying breed.

The reasons for this are as myriad as they are consequential, affecting everything from regional economic competitiveness to magnifying food insecurity. Some are cultural, too. It is true that for many, the rhythm of farm life recalls sheer drudgery and a payoff that can be thin at best. Rural development discourse is often filled with anecdotes of parents working hard to get their children off the land, sending them to universities in the adjacent urban cities so they can attain “a better life”. Conditioned by this school of thought, picking up the pitchfork at a farm can feel like a step backwards for many young people. Capitalist tinkering has hurt the demographic as well. The information industries and their enormous appetite for highly skilled workers, in particular, have popularised a large share of this economic shift.

While a growing pool of millennials are now trying to overturn the stigma – in the face of economic and cultural deterrents, they are applying scientific approaches and data-crunching apps not just to increase yields, but to show that agriculture can be cool too – their numbers are still miniscule at large. Sunway Group chief innovation officer and Sunway iLabs director, Matthijs Van Leeuwen believes it takes a village.

“Other stakeholders also play a critical role. We need the authorities, for example, to frame more progressive farming policies; the investors and banks to provide capital to entrepreneurs; and educators to build a more robust agri-talent pool,” he said. “At the moment, most funding for agri-preneurs in Malaysia is still coming from bank loans. The government should consider setting up a venture capital fund and give incentives to corporates and existing fund managers who invest in early-stage companies. It is not just technology that drives the agenda. To avoid over-reliance on foreign labour, we must work together to entice the youth to consider farming as a profession.”

And one of the best ways to make youth enjoy farming is to teach them to do a good job at it, which is what Sunway iLabs is striving to achieve through its Sunway XFarms. Other than to nourish, empower, and innovate, the skill-building hub is built to educate. The public can find a variety of courses made available to them: introductory lessons to urban farming, grow-your-own-food workshops, and even hands-on experience in running a smart farm. By encouraging young people to dig into the dirt – in this case, hydroponic solution – these classes seek to nurture an inherent respect for nature. Because if we do not take care of our land, it cannot take care of us. Many agencies in the country encourage similar activities: city gardening, healthy eating, entrepreneurship. But few have integrated themselves with equal reach and result as XFarms. Its holistic ecosystem that gathers a diverse set of agricultural-related vocations has shed light on many successful real-life examples within the farming community that youth can look at and aspire to be like. It is all part of creating a tenuous link between veteran farmers and, hopefully, a new wave of agrarians, through which we may finally be able to jump-start a more inclusive food movement and see the next generation reclaim the farming tradition once again. 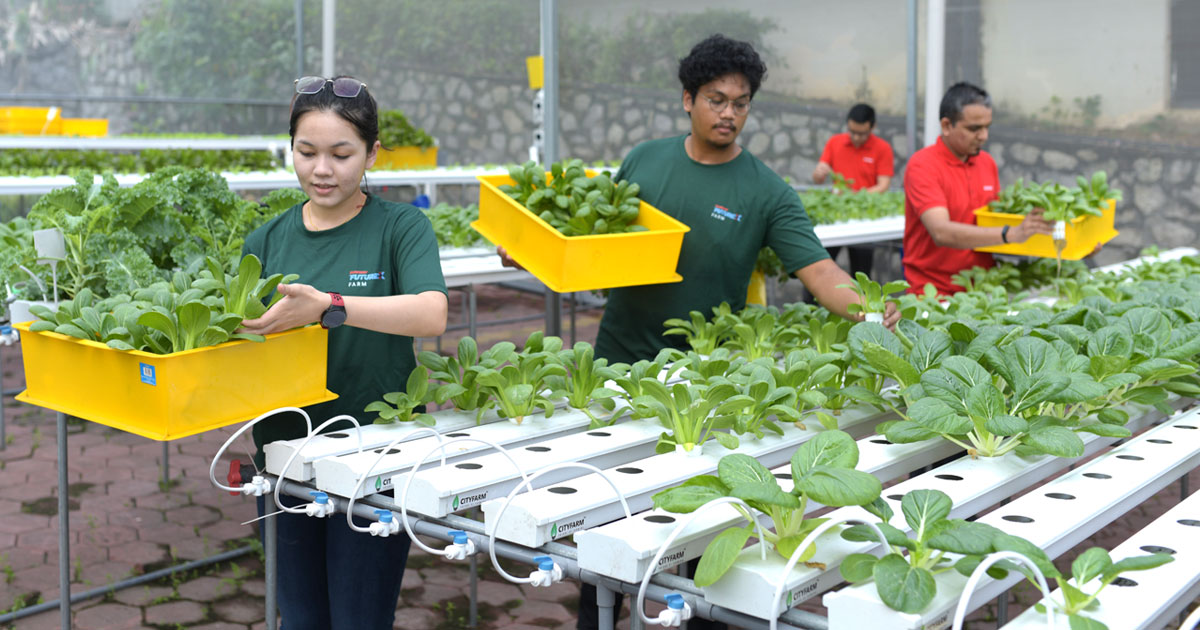 What Does Malaysia’s Next Smart Sustainable City Look Like?